How fuel excise pays for our roads

What is fuel excise?

Fuel excise is a flat sales tax levied by the Australian Government on petrol and diesel bought at the bowser. The current rate is 42.7 cents in excise for every litre of fuel purchased. This rate is adjusted from time to time in line with inflation and is in addition to the GST.

Budget papers show Australian motorists will pay $49.3 billion in net fuel excise over the next four years. These papers also show that the equivalent of almost of all this, $46.8 billion, will be re-invested in land transport projects. 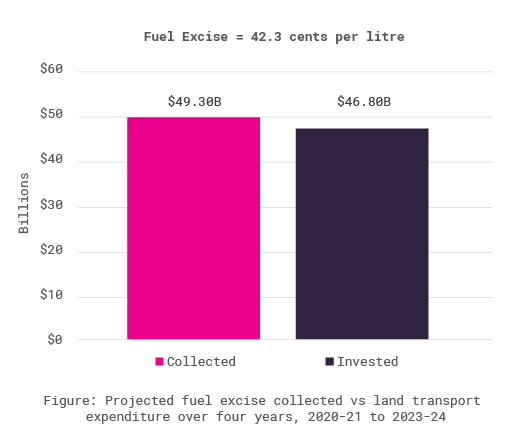 All Australian motorists who purchase petrol and diesel at the bowser pay 42.7 cent a litre in fuel excise. Separately, a Road User Charge is paid for each litre of diesel by the owners of heavy vehicles such as buses, coaches and trucks on public roads.

This means that if you are driving a petrol or diesel vehicle on a public road – you pay fuel excise.

There are some exceptions. The Government provides a rebate (tax credit) on the fuel excise to some industries, like mining and agriculture, as their vehicles don’t use public roads.

Owners of pure electric vehicles (or other zero emission technology vehicles), which do not require liquid fuels, do not pay any fuel excise.

The recent federal Budget shows Australian motorists will pay over $11 billion in net fuel excise this financial year, and $49.3 billion over the next four years. For the typical household, this year’s fuel excise bill will be $1,188.

To find out how much tax you’re paying, try our Fuel Excise Calculator.

As cars have become more fuel efficient and new zero and low emission technologies (including electric vehicles) become more widespread, the amount of fuel excise collected by the federal government has been falling when compared to road use. 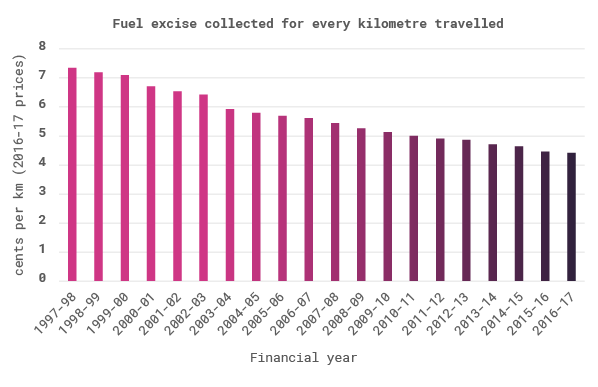 Fuel excise is used to help pay for our roads.

“Charges applied to road users through the excise paid on petrol and diesel is used to pay for the construction and maintenance of roads in Australia.” Deputy Prime Minister Michael McCormack

Unlike registration and driver’s licence fees, which go to state and territory governments, fuel excise is collected by the federal government.

Like almost all federal taxes, fuel excise goes into the Government’s general revenue, which is then drawn upon to fund our transport infrastructure. It is the contribution that you, as a motorist, make to the development and maintenance of our road transport system.

More fuel excise is being invested back into infrastructure projects.

As the economy recovers from the COVID-19 lockdown, the federal Budget shows that net fuel excise to be collected will recover slightly over the next few years to about $13 billion in 2023-24. 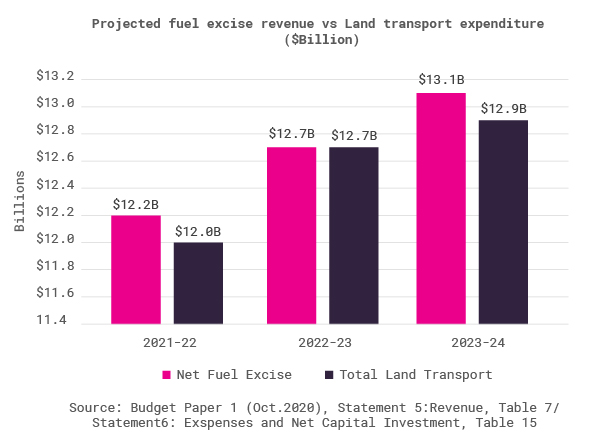 As technological shifts force a reduction in the amount of fuel excise collected, Australia needs a new way of funding transport projects. Our recent survey of 4,512 Australians shows 79.9% agree that owners of electric vehicles should contribute towards the costs of the nation’s roads in some way.

The Australian Automobile Association has long advocated that electric vehicles be brought into the road user tax system – initially at a discounted rate to avoid disincentivising their take-up – and recommends governments allocate the revenue collected to programs that assist in the roll out of ultra-low fuel consumption technologies and infrastructure.

Electric, other zero and low emission technologies are the future.

Australians also agree that while it’s essential we have funding to maintain our road network, it’s important that the uptake of electric and other zero emission vehicles is not impacted. The AAA’s recent survey showed that 78 per cent or participants agree that a new Road User Charge should be at a rate that does not discourage the uptake of electric and other ultra-low fuel consumption vehicles.

The investments being made by global carmakers mean electric vehicle technologies will keep improving, prices will keep falling, and sales will keep increasing.

Light vehicles currently only make up about 12 per cent of all carbon dioxide emissions.

As cars are becoming cleaner, the carbon dioxide emissions intensity (CO2 grams/km) of new passenger and light commercial vehicles sold in Australia has fallen by 28 per cent since 2002.

It’s only when you include road freight, rail, aviation and shipping that the transport sector becomes the third largest contributor to Australia’s greenhouse gas emissions.

Yet passenger cars remain only a small contributor to the transport emissions sector.